Lessons from the man who inspired billions to lead healthier lives

HomeArticlesLessons from the man who inspired billions to lead healthier lives

Lessons from the man who inspired billions to lead healthier lives

“Jack, you’re a walking garbage can.”

That’s what pioneer nutritionist Paul Bragg (1895-1976) said to a 15-year-old Jack LaLanne after LaLanne told him his food consumption consisted of “cakes, pies and ice cream.”

“I was the weakest-looking kid you ever saw. The kids at school took turns beating me up; even the girls. My parents took me out of school at 14, thinking a rest would improve my health.”

The very night of his encounter with Bragg, LaLanne got down on his knees beside his bed and prayed…

From that day on, LaLanne’s life changed.  He went from someone who was thin, weak, sickly, wore a back brace and had his share of pimples and boils to one of the most dominate fitness and nutrition proponents in history.

In 1936, he opened the first modern health club in downtown Oakland, California.

People thought he was nuts and doctors said it was terrible advice when LaLanne advocated that elderly people should exercise.  His detractor said it was a good way for the elderly to break their bones.  Today, of course, we know it’s the best way for older people to strengthen their bones.

He was also the first one to advocate that women should exercise.  In response, doctors said that women who did as LaLanne suggested would not be able to bear children.  Today regular exercise is one of the best ways to prepare for a successful childbirth.

Along the way he developed many of the exercise machines that show up, in some form, in gyms across the globe today.

In a 2003 interview with Janice and Dennis Hughes, LaLanne said this about the importance of both exercise and nutrition…

“You have to take care of your 640 muscles, and the number one thing is exercise. You can eat perfectly but if you don’t exercise, you cannot get by. There are so many health food nuts out there “that eat nothing but natural foods, but they don’t exercise and they look terrible. Then there are other people who exercise like a son-of-a-gun but eat a lot of junk. They look pretty good because the exercise is king. “Nutrition is queen. Put them together and you’ve got a kingdom!” 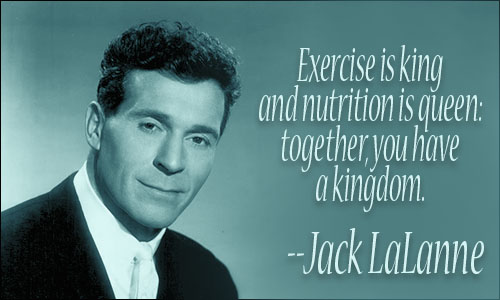 So what exactly did Jack advocate nutrition wise?

Leading up to the 1955 Mr. America contest (which he won) LaLanne had been a vegetarian for six years.  He says that “in those days they thought in order to build up muscle you had to have meat” – so he ate meat to prepare.

After the competition he altered his diet, eliminating meat, chicken and turkey – choosing instead to get his protein from fish and egg whites.

He used no milk of any kind.  “Anything that comes from a cow, I don’t eat,” he said.

He used to drink six or seven glasses of water a day and eat “five or six pieces of fresh fruit a day and ten raw vegetables.”

“…ice cream, butter, cheese, whole milk, all this fat…high blood pressure is from all this high-fat eating.  Do you know how many calories are in butter and cheese and ice cream?  Would you get your dog up in the morning for a cup of coffee and a donut?  Probably millions of Americans got up this morning with a cup of coffee a cigarette and a donut.  No wonder they are sick and fouled up.” 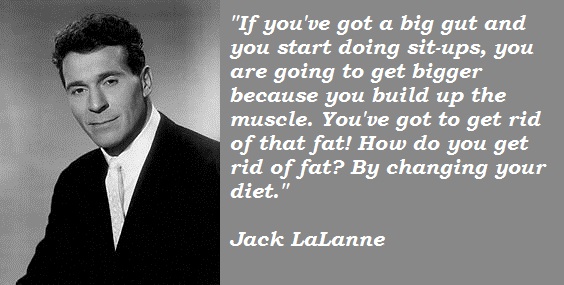 He wasn’t big on foods that came in a box.  He once famously said “If man makes it, I don’t eat it.”

And he never snacked; he only drank water between meals.  In fact, he claimed the last time he had a dessert was 1929.  As for alcohol he didn’t drink beer, but did enjoy one or two glasses of red wine with his dinner.

He never took prescription medications or steroids.  But he was big on taking supplements.  He used to take 40 to 50 a day.  90% of them natural.

Even up to the end of his life, he was still working out two hours a day.

“The main thing is to start a weight training program. It’s not about seeing how much you can lift. I’m talking about specific exercises for your arms, shoulders, chest and back. With weight training you can control things, work around your infirmities, if you have an injury or pain in a certain area. That is the beautiful part about weights: even if you are 100 years old, you can lift something. Maybe it’s only a half a pound or a pound or two pounds. It will still do something,” he once said. 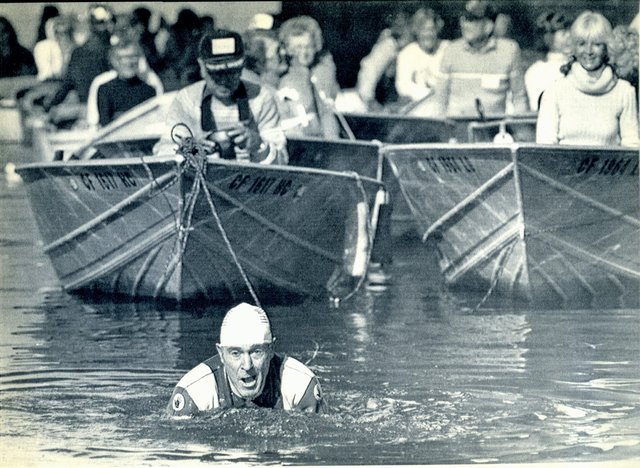 LaLanne is quoted as saying that he didn’t care how long he lived, he just wanted “to be living while I’m living.”  Adding that he feared that if he did die,” it would ruin his image.”

On January 23rd 2011, after a week battling pneumonia, Jack LaLanne passed away at the grand old age of 96.

Upon LaLanne’s death, actor and politician Arnold Schwarzenegger paid tribute to LaLanne calling him “an apostle for fitness” and a man who inspired “billions of people all over the world to live healthier lives.”

In an interview LaLanne gave when he was 91 years old, the last question he was asked was is there “anything else you’d like to share with our readers?

“Anything in life is possible, if you make it happen.  Help the most important person on this earth: YOU.”