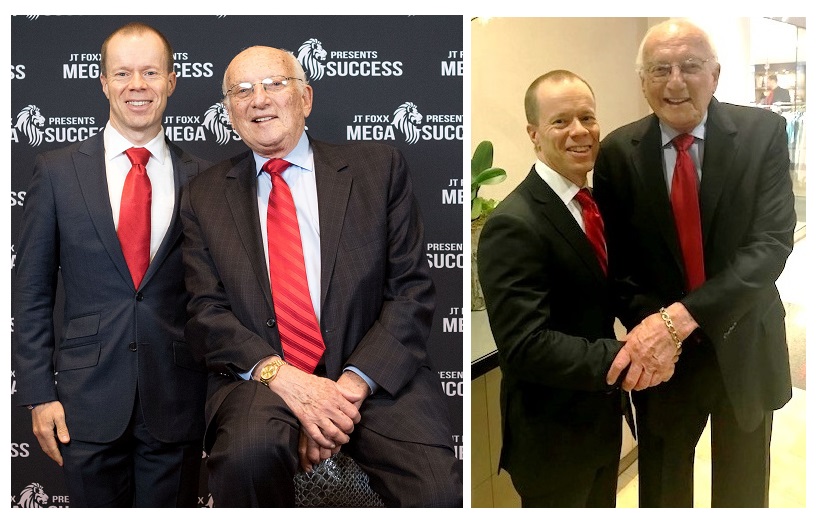 When I was in Los Angeles last year in a conference with 2,500 people from 75 countries, I met George Ross. George was Donald Trump’s righthand man for 47 years prior to him becoming President of the United States. George was Executive Vice-President and Senior Counsel of the Trump organisation and best known for his role as one of Donald Trump’s advisors on the smash hit reality show Celebrity Apprentice. On the program he monitored the progress of contestants and assisted Trump in determining who should be fired.

At age 91, George Ross is an incredible example of the importance of healthy lifestyle, great nutrition and keeping your mind active. George is one of JT Foxx’s Coaches and JT is my coach. What I love is how JT allows me access to his own personal coaching calls with George. If you’ve ever heard JT and how hard he coaches, you should listen to how hard George coaches JT. George calls a spade a spade and gets phenomenal results. Even though George is 91, he still travels to various parts of the world with JT to coach and educate his students. George gave a great insight into being successful;

“To be successful you have to be uncomfortable. Sometimes you will fail. But failure gives you hunger. You must understand your limitations, have a great coach and have fun along the way.”

George is such a down to earth character with so much personality and spark. I was walking down the corridor of the Convention Centre in LA, where George was presenting later that day, when I noticed him walking towards me. Someone else had noticed him and stopped for a photo. I also decided to stop and politely asked for a photo as well. I was next in line for a photo when a sea of people suddenly transcended upon us and started to push and shove to get in front of me for their photos. At this stage I was feeling a little disappointed that so many people were harassing George and not being respectful and patient. However, George saw what was going on, he reached out to me, grabbed my hand, pulled me in a wrapped his arm around me for this great photo. Thank you, George you are such a lovely man.

What I also learnt was that he served in the army and chose to go to law school after getting married. George has now been married for 66 years! He didn’t have any money and his wife paid to put him through law school. “We struggled financially” but he loved the “thrill of performing in the face of the struggle.” George went on to become proficient as a real estate partner and went on to work with multi-million-dollar investors. That is how he came to work with Donald Trump. George is the author of two very successful books Trump Strategies for Real Estate and Trump Style Negotiation.

It’s hard not to fall in love with George when you hear him speak. As he ages he knows he needs to keep his mind actively growing. Despite all the legal expertise he has, despite being JT’s coach and coach to many of JT’s students, he also teaches people how to use Microsoft Excel. Why? Because it challenges a different part of his mind and he is very aware how crucial it is to work out your mind as much as your body to stay healthy. Isn’t that fantastic! Having lost my Dad to dementia at age 77, I know the importance of an active developing mindset. You let your mind die, you will die. It’s up to you to keep all aspects of your life active.

Couple of closing points that resonated with me. It’s easy to get caught up in this mindset of money will solve all your problems. George is incredibly successful and wealthy, but he says, “Consider how much money you make and what you do with it versus the balance of family, friends and health.” Wealth without health is broke! I also love how George talks about having a meaningful impact in the work that you do. We spend so much time in our lives working. Follow your passion and put absolutely everything into it; “Will this place be better off in 15 years because you were here.” Now that is a powerful question. What’s your answer?

If you want to start your very own success journey and learn how you can maximise your energy, functional strength and optimise your health at any age, then YOU can get started with our FREE Consultation. Imagine having more energy and feeling better in is as little as 3 days! All our Success Stories started by taking this same first step.